Listen to this article

If we thought 2020 was a year to remember, then 2021 arguably surpassed it with flying colours—not least in the fashion realm, and how men chose to dress themselves.

Just like the year on a whole, the red carpets of 2021 felt like an undefined, chaotic smorgasbord of events, especially considering the ones in the first half of the year were held mostly virtually. This allowed famous men to flex their Zoom camera style (think Riz Ahmed in relaxed Celine Homme, and Tahar Rahim wearing slippers with his Louis Vuitton suit at the virtual Critics Choice Awards), but once carpets became physical once again, it felt like men’s fashion had turned over a new leaf.

Where the black tux used to be the norm for men’s fashion at prestigious red carpet events—with a white-tie suit occasionally slipping through the cracks—famous men have been dressing with a noticeable new level of pizzazz since being let free from their virtual confines.

Things we never thought we’d see in 2021, but did: Daniel Craig wearing a magenta-coloured velvet suit for his final premiere outing as James Bond, Justin Bieber popularising the ridiculously-baggy ’fit in a suit from his own brand, Drew House, at the Met Gala, and Jacob Elordi bringing back ’70s American Hustle-style exaggerated tailoring with swagger for an appearance on Jimmy Kimmel Live!. A casual tailoring masterclass, if we do say so ourselves.

The year gone by has been littered with fantastic menswear moments from our favourite celebrities, often completely defying convention. The aforementioned Met Gala paid host to plenty of fantastic style moments, but it was A$AP Rocky’s look, a repurposed blanket from new brand ERL, that embodied just how inventive men felt this year.

Perhaps the standout of all 2021 men’s fashion trends is that simpler is sometimes, better; take Harry Styles, who wore sneakers with his retro-print Gucci suit at the 2021 BRIT Awards, or Oscar winner Daniel Kaluuya, who opted out of a traditional tux at the Academy Awards and wore—gasp!—a t-shirt under his incredibly sharp Bottega Veneta blazer. Once this would’ve been considered Oscars sacrilege, but in 2021, it’s a whole different ball game.

Perhaps it’s the fact that fashion has been relegated to the rectangular, often pixelated, confines of a Zoom call over much of the past year, that’s made famous men want to dress in a manner that stands out. In a world where nothing is certain, why waste time dressing blandly?

Keep scrolling for GQ’s picks of the best menswear red carpet ’fits from 2021, from LaKeith Stanfield to Timothée Chalamet. Alton Mason in Theophilio at the Met Gala, September 2021. Bad Bunny in Burberry at the Grammys, March 2021. Bowen Yang in a Zegna suit and Syro shoes at the Emmys, September 2021. Colman Domingo in Atelier Versace at the Oscars, April 2021. Dan Levy in custom Loewe at the Met Gala, September 2021. Daniel Craig in Anderson & Sheppard at the No Time To Die premiere, September 2021. Daniel Kaluuya in Bottega Veneta at the Oscars, April 2021. Harry Styles in Gucci at the BRIT Awards, May 2021. Headie One in Louis Vuitton at the BRIT Awards, May 2021. Jake Gyllenhaal in Valentino at the Venice Film Festival, September 2021. Jared Leto in Gucci at the House of Gucci London premiere, November 2021. Jason Sudeikis in Tom Ford at the Emmys, September 2021. Josh O’Connor in Loewe at the Rome Film Festival, October 2021. Justin Bieber in Drew House at the Met Gala, September 2021. Kodi Smit-McPhee in Gucci at the LACMA Gala, November 2021. LaKeith Stanfield in Saint Laurent at an Oscars screening in London, May 2021 Maluma in Versace at the Met Gala, September 2021. Pharrell in Chanel at the Met Gala, September 2021. 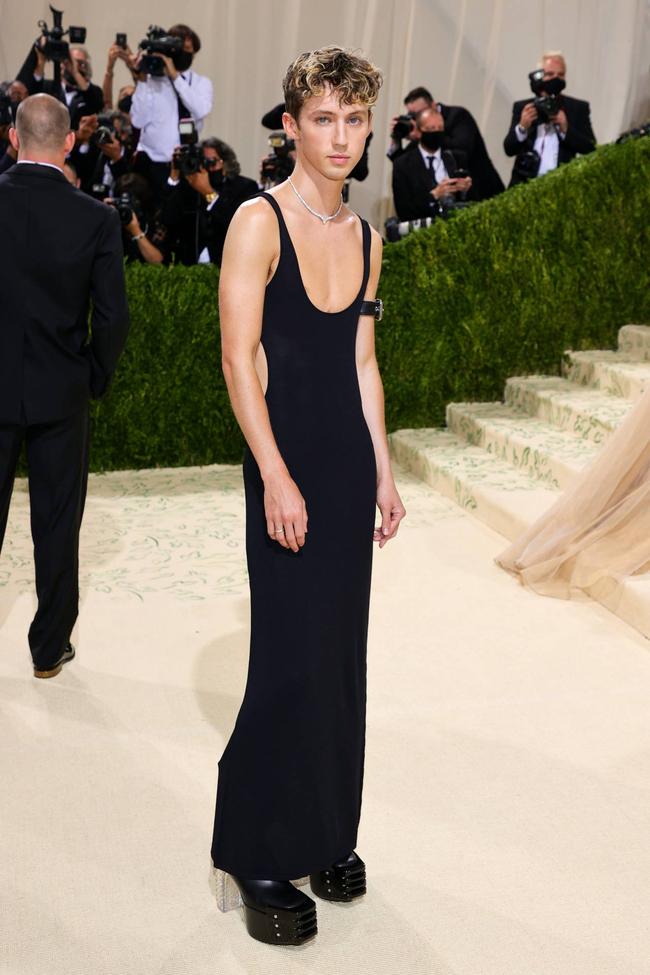 Troye Sivan in Altu and Rick Owens boots at the Met Gala, September 2021.

Previous story :How To Speed Muscle Recovery With These Basic Foundations

Next story :Why challenges make the best New Year’s resolutions

Listen to this article  Source:layjao.com   Your bedroom is your personal space, one that provides you peace and a good night’s sleep after a long day at work. It should be designed in such a way that it makes you forget your tiresome day as soon as you enter. With the right-chosen furniture, furnishings, and […]

Listen to this article If you’re looking to update your decor, then hanging pictures is a fantastic choice. Not only is it an easy way to make any house feel like home but it also allows you to showcase your personality without breaking the bank. It’s even said to make you happier in general. Whatever […]

7 Ingredients of a Mental Health Makeover

Listen to this article 1. Identify the problem(s)   Some people never get to this point. They know they’re in a funk but for whatever reason, whether denial or busyness, they don’t take the time to assess what’s going on. Sometimes the root issue will be obvious. At other times—not so much. First, take a […]

Listen to this article “Like every good man, I strive for perfection, and, like every ordinary man, I have found that perfection is out of reach – but not the perfect suit.”  – Edward Tivnan With the fall season soon turning into winters, men are now gearing up to make a fashion statement with their […]

What To Gift Him On Valentine’s Day? – 12 Lovely Gift Ideas

Listen to this article It is that time of the year when Valentine’s Day gift ideas for men are sweeping the minds of his lady. And why not, love isn’t enough, expressing it well is equally important, because LOVE is the topmost emotion! So why not cross limits to express the same in style. So […]

6 Reasons why Wearing Linen Clothing is Ideal for Summer

Listen to this article It’s a hot summer around the world, and wearing appropriate clothes is one of the first things we can do for ourselves, no matter if we are at home, work, or we need to spend some time outside. The fabric plays an important role in keeping us cool while outside our […]

How To Upcycle Clothes Within Hours? [10 Trendy Ideas]

Listen to this article This article aims at motivating you towards upcycling clothes ideas because Mother Earth needs you to do your bit, more than ever…NOW! In the age of drastic climate change, global warming triggering calamities, upcycling fashion is picking up as one of the fastest and sustainable trends in the last 8 to […]

Listen to this article The basic criterion for buying lingerie for most ladies is the fact that it’s beautiful, sexy, and fits them well. However, when buying these things online, you need to know a few more things. Therefore, here are a few tips & tricks you need to know when it comes to online […]

Listen to this article These Cheap Necklaces Can Make Ordinary Clothes Look Good Do you know that necklaces can upgrade the look of ordinary clothes to make them look expensive and good? Yes. Key accessories like cheap necklaces can transform the most basic outfit to give it a special look. It does not have to […]

Listen to this article When buying a new pair of shoes for men, we often focus on comfort, brand, and weight only and tend to overlook the color. Ask any man about what color he would like his new shoes to be, and he is more likely to say either black shoes or brown! We, […]

Listen to this article  Source:express.co.uk   Buying gifts is a universally adopted form of showing care, love, and affection towards another person. It is hardly a novelty concept as gifts have always been special in our society. From the earliest days of civilizations, crafting or buying something for somebody else and showing you are thinking […]

Listen to this article Shopping online is a great way to complete your wardrobe without leaving your home. It saves time as well as the nerves associated with finding clothes in the shopping center crowd. Sometimes, having work and household chores, it isn’t easy to find time to visit a boutique and choose the perfect […]

Listen to this article  Source:cipelicastiklica.com   Nowadays, people cannot imagine life without taking out a loan (few can) that they need to buy certain real estate, land, or on the other hand starting a certain business venture. Personal loans are loans for which the purpose has not been determined in advance. In order to obtain […]

Listen to this article Summer fashion forecast: Lots of soft breezy styles with a 100% chance of fun prints. And summer is still in full swing, especially in our Southern Part of Heaven! This summer season it’s all about lightening up your wardrobe and playing with fun prints. Continue basking in your most stylish summer […]

Creating a Budget and Paying for Your Next Trip

Listen to this article  Source: mlrpc.com   A family vacation is something exciting just to think about. If you’re in the midst of planning the trip of your dreams, there could be just one thing standing in your way—the cost. There are a lot of things you can do to plan a budget-friendly trip. For […]

Listen to this article One of the most obvious effects of the mass vaccination campaigns, in different corners of the world, is the rediscovery of travel, of travelling alone or in company, even on a yacht, discovering new scenarios in which to indulge in complete and total relaxation, thousands of miles away from the problems of […]

Tips for Mothers to Manage Kids Dressing with Work Schedule

Listen to this article In today’s world, the biggest question is for working mothers to take care of their kids. But it is necessary as well to give some time to your child as well. It is always equally important for a working mother to handle her child properly so that she will not be […]

Everything You Need to Know About Sea Moss

Listen to this article  Source:detoxandcure.com   In this day and age, it can be difficult to find the best health supplements for your specific needs. With so many options at our disposal, it can be challenging to get the right information on what you’re considering putting into your body. It seems like every month there’s […]

What makes a good friend?

Listen to this article Having good friends who love and support you for who you are is really important for your happiness. Figure out what makes a good friend, and learn how you can be there for your friends when they need you most. This can help if: you’re not sure about a friendship you […]

13 Random Facts that you Might Have Heard the First Time

Listen to this article  Source:medium.com   Who among you here likes facts? You’re in luck, we have decided to make a list of some did you know facts that will surely tickle your pickle. Are you one of those people who like to question a lot of things? If you are, then you are in for a […]